Fringe Event: What's the point of the Liberal Democrats? 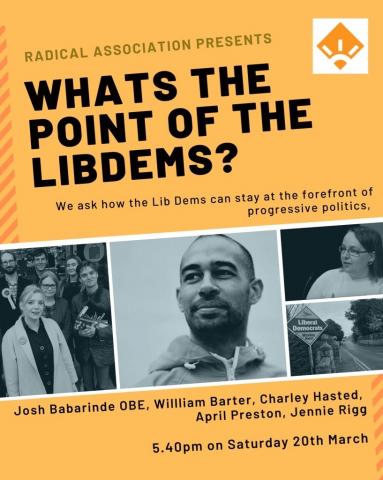 We're really excited to announce that we'll be holding our first ever fringe event at Lib Dem online Spring Conference this year.

How to join: Make sure you've registered for Lib Dem conference and then click here to attend the fringe event when it's time for it to start.

The fringe is co-hosted with LGBT+ Liberal Democrats.

It is vital that we have a frank discussion about the party- what it has been and achieved in the past, and how best it can be a vehicle for change and improving people’s lives in the future.

With the Liberal Democrats facing both a crisis of existence and purpose, it’s important that pressure groups like the RA and LGBT+ Lib Dems step up with a new progressive direction. This fringe gives the best of our ideas people the perfect platform to communicate that direction to the party.