Where now on welfare for the Liberal Democrats? 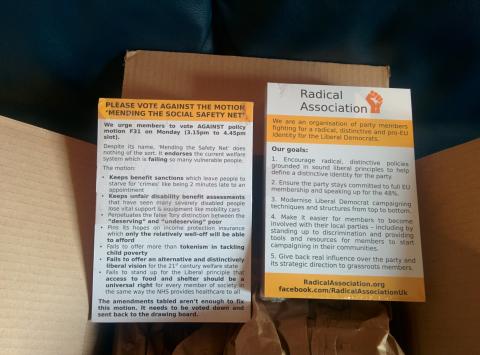 Summary: The welfare motion that recently passed Liberal Democrat conference, whilst committing the party to campaign for important and positive changes to the current welfare system, falls short of being a much needed vision for a radical overhaul of social security for the 21st century. Nonetheless, we welcome the improvements made to the party’s policy by the motion, and look forward to this being a stepping stone towards the adoption of a bolder, more forward-thinking policy in future to overhaul the welfare system at a fundamental level.

Before and during Lib Dem autumn conference the Radical Association campaigned for party members to reject the policy paper on welfare. You can read our reasoning behind this here but, in a nutshell, we believed that what was needed was a radical vision for a new welfare state which would ensure that no member of society was left without the bare minimum they need to live.

Leaflets distributed by the Radical Association at conference urging members to reject the welfare policy paper.

Unfortunately we were unsuccessful and the motion was passed convincingly by conference, though over a third of delegates backed our position in a counted vote. However, the good news is that the first amendment to the motion, which called for the scrapping of all benefit sanctions, passed, and the amendment to retain the benefit cap was heavily defeated.

What this means is that, while the policy passed is still no substitute for a Beveridge report for the 21st century, it at least contains some proposals which Liberal Democrats can campaign proudly for until there's the opportunity to revisit welfare policy at a future conference.

We urge party members to campaign on the basis that Liberal Democrat welfare policy is to:

These changes still don't go far enough to tackle all of the holes in our social safety net, such as benefit delays, confusing bureaucracy, substandard levels of support, cracks which vulnerable people can easily fall through, catch-22s, appalling treatment of disabled people and worse. They are nonetheless a positive start that gives the Liberal Democrats a clear progressive edge on social security policy, and we at the Radical Association will be working hard to help the Liberal Democrats raise public awareness of these policies.

Our challenge for the future is to help the party strongly and loudly articulate these policies in its campaigning, regardless of what the Daily Mail might think of them – and to work towards developing a stronger and more compelling liberal vision on welfare policy.

We still need a new Beveridge Report for the 21st century. We still need a compelling vision and a detailed blueprint of how we can build a sustainable social safety net for the future where no member of society is left without the bare minimum they need to live.

In order to produce that compelling vision, we can also announce that the Radical Association is in the early stages of plans to build a broad coalition of groups and experts from across the ideological spectrum of the party, with the aim of developing an independent welfare policy paper to propose the policies which should have been put before autumn conference in Brighton. We're optimistic that this can mark the start of a seismic shift in the way the party makes policy - and we hope to be able to provide more details of this in the near future.