Liberals must stand against the rising tide of xenophobia 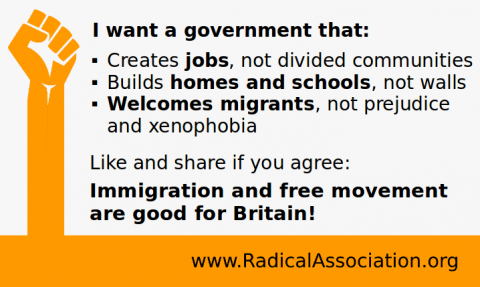 The facts are clear on immigration: it benefits the economy, strengthens our public services, and gives Britain the diversity that helps to make us a global cultural powerhouse.

The campaign of fear against migrants, though, has now infected the heart of Britain’s government and society – which is why Liberals and their allies from all parties must stand against the rising normalisation of xenophobia.

We need to show badly off and isolated communities across the UK that we can provide real solutions to the daily challenges they face instead of the lies, spin, and crass empty rhetoric that have brought us here.

A rising population can create localised pressure on services which needs to be acted upon effectively and urgently, but with migrants paying literally billions more in tax than they receive in benefits, demonising on migrant workers will only make it harder to build the hospitals and provide the investment that our worst off areas need.

Arbitrary caps on migration will make it harder for our academic and creative sectors to bring in the best talent from around the world, potentially leading to a catastrophic “brain drain” in the strongest areas of Britain’s economy.

What’s more, clamping down on migration with arbitrary measures can actually end up increasing numbers – the fear that they won’t be able to get back in for seasonal work next year can often put pressure on lower paid migrant workers to stay in the country permanently.

Vast numbers of people up and down the country voted for Brexit in 2016, and the Tories or UKIP in 2015, because they were lied to – not just about the £350 million a week, or trade access, but the biggest lie of all, that immigration was the real threat to their jobs, homes, and livelihoods. Those people deserve much more than for us to buckle and go along with this scapegoating – they deserve the truth.

For a generation, politicians have been failing communities in poorer rural or urban post-industrial areas, and fobbing them off with promises that it’ll improve when immigration is reduced.

This political failure has to end. What communities need is for us to build bridges, homes and schools, not walls. We need to put up job numbers, not barbed wire. And we need to support migrants to integrate, not shame them into seclusion. That has to be the core of our strategy going forwards – to relentlessly make the pro-immigration case, and to offer a clear alternative strategy to help those communities that have so often been left behind.