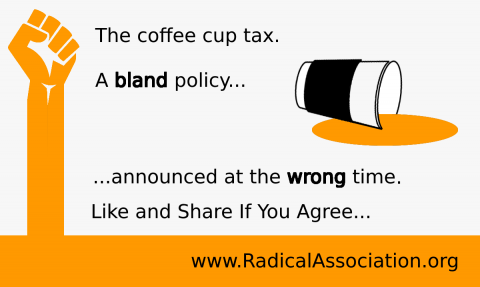 Last week the Lib Dems announced a policy which got (relatively speaking) a lot of media attention - a proposed 5p tax on coffee cups to discourage waste.

There are two big problems with this.

Firstly, although the policy isn't a bad idea in itself, it is not about an issue which many people would consider to be a major challenge facing the country and the proposed tax is such a bland idea that it says nothing about core Lib Dem values.

If anything, it just gives the impression that we're a non-serious party of quirky gimmicks because we've run out of anything else to say.

Secondly, the policy was announced at completely the wrong time. The top issue dominating the news last week was Europe - an issue which people rank as the second biggest challenge facing the country according to polls.

It was also the week where the Lib Dem position on Europe was confused. Two of our MPs had backed the Open Britain campaign which seemed to be giving up on the idea of free movement even though just after the referendum Tim Farron had said we would fight to stay in the EU. Tim also made a speech later that week denouncing post referendum racism and division.

But, rather than clarifying our position on the EU to reinforce the message to the public, instead the party announced the coffee cup tax - a gimmick which succeeded in getting media attention and drowning out everything else we were saying that week in the process.

The coffee cup tax is a "silly season" policy. It's a good announcement for a time when the media have nothing else to talk about and the party needs to get some coverage. It would also have been good to announce it just after the figures showing the success of the plastic bag tax which we introduced in coalition - a logical next step policy from a party that cares about the environment.

But coming when it did, the policy is just a bland gimmick which won't excite anyone, doesn't make our fundamental values clear and which doesn't address the major issues facing the country. And that isn't good enough.