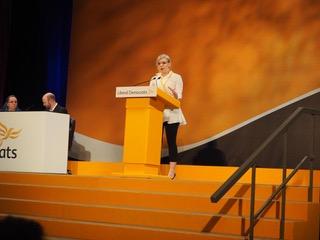 Last Spring, I spoke against our party’s disciplinary motion, “Our party aims to be agents of change and we do so by producing progressive policy’, I nervously spluttered, my first ever time speaking in that bright-light yet mustardy stage-space. So it is a natural progression then, that this Autumn conference I have submitted my first ever amendment.

Heart palpitations aside, I am hoping to positively reform the Party’s Disciplinary procedure. In order to lend my support to the overall motion I am seeking to persuade the members in the conference hall to take a innovative and user-led approach to tackling the scourge of sexual harassment and assault, unseen by any other political party to date.

From my experience, and after consulting with fellow female Liberal Democrats, with victims of abuse, and after seeking legal advice, I can see a way for us to take head on an issue which most other institutions sweep under the carpet.

My proposed system, Anonymised Incident Reporting (AIR), maximises complainant control when reporting or logging an offence, offering victims a variety of ways to anonymously detail what has happened to them or what they have been witness to.

To summarise, AIR allows survivors of sexual assault to create encrypted, time-stamped records of their assault, and to only formally hand their report to the party as a full complaint when they're ready to take action. It encrypts all information on both the complainant and assailant, and offers victims multiple options in how they handle their report and whether to turn it into a formal complaint.

An AIR system would allow the party to offer some initial support and advice to anonymous victims - both about how they move forward with their report and what other support they can seek.

A year after deciding to report my assault, I ended up finding the process of reporting to be more traumatic than the event itself. Feeling not believed by the people who I thought were there to project me was incredibly destabilizing
- Jessica Ladd the Creator of Project Callisto.

I, along with others, have developed these ideas along similar lines to the Project Callisto system used on many US college campuses. The technology already exists and, by using encryption, we can give more and better options to survivors. Nonetheless, the amendment I have submitted is intentionally open-ended about some of the precise details of the system, in order that we can move towards an AIR system that is well researched and workable for all those concerned. It therefore offers the party scope to see what they are able to adopt, whilst pushing for a radical new approach that puts victims’ agency and their choices at the heart of our disciplinary procedures.

But broadly, using Callisto as a model for the type AIR which the party could implement, below are three scenarios which the software enables :

The power of Anonymity

Callisto has been described as an ‘information escrow agency’. It holds onto records securely but only reveals the name of assailant when there is a match. It is only then the institution is informed and all information is encrypted before this point arises.

And, by 'matching', AIR software can allow for the tracking of patterns of behaviour and the easy identification for repeat offenders.

Anonymity is important for the simple reason that it keeps victims of violent and/or sexual crimes safe from their attackers. We do not have the resources available to protect them ourselves should the accused be made aware of who made the complaint so we must do all we can to protect them in other ways. This is why this amendment speaks to me.
- Becca Plenderleith (Holyrood and West Dunbartonshire 2017 PPC, Chair of the Scottish Young Liberals)

Survivors who visited Callisto were five times more likely to report than those who did not. Both Cardiff and Cambridge universities have taken similar AIR steps, both have seen the numbers of reports rise. This anonymity approach, informs us of two things, victims stand by it, and it is thus more likely to produce more conclusive results in its reach; the more people who use it the more evidence conclusive evidence the party would then have if it required.

Here in the UK, we already have similar charities working on a AIR principle, such as The Blue Sky Centre (http://www.blueskycentre.org.uk/are-you-a-victim/anonymous-reporting/), the difference here is that, Callisto reports upon a match, it does so when there is enough evidence to question an individual, whereas groups such as Crimestoppers, report on an individual basis and would take up police time with the limited information at bay.

Callisto is currently being adopted in many US colleges and universities, the first being Stanford University. Thanks to its use the university has been able to see spikes of sexual assault cases, particularly around Spring Break - similar to the way in which concerns have been raised about spikes in harassment and assault at our very own party conferences.

This time two years ago we were in the same place for conference that we are now, Brighton, and the national party put out an email warning members of the importance of consent over the conference period. Where this is a worthwhile endeavour, it demonstrably informs us of our own ‘spike’ in sexual assault and harassment cases. Conference is where, sadly, we have this problem.

But by using a similar reporting model to that of Stanford we would be able to track this problem with the help of actual evidence and statistics, ant to start identifying the repeat assailants who abuse party conference to act in a way which needs to be stamped out.

An AIR system would not only help those facing the anxiety of making a complaint, but also our own members who oversee the complaints. Many of them endure huge quantities of work, have undergone little or no training and are largely unpaid volunteers trying their best in incredibly complex situations. This improved anonymity system would take the work load off those facing this strain as it is able to determine risk and does so in a way which is much more discreet, meaning less counter-complaints and kickback by those members involved.

It is important to recognise we are dealing with members, not workers, people who do this difficult because they care, they are Liberal Democrats striving for a better society, many a time, against all the odds. We should embrace a system that would make their life easier and protect them from criticism by making the system more thorough and reliable.

The strive for Gender balance

It is from my personal experience that I believe these provisions would help members stay in the party; it could provide significantly improved support for those who end up becoming less engaged, or those unable to attend events, meetings or action days in fear of seeing their assailant. On US campuses, survivors who visited Callisto were five times more likely to report than those who did not, a huge increase in the effectiveness of the system.

I’m tired, not just tired, I’m exhausted, being a woman in our party […] A procedure is only as good as the least person using it and its only as quick as the person drawing their feet
- Sarah Brown, Manchester Central, Gorton and Blackley Membership Development officer. Speaking against the amendment last year. Link here - https://youtu.be/9gbO-32S3QE?t=2h30m11s

We should see this, too, along with the ongoing problem of gender equality and representation in our party. This issue disproportionately affects women; a group in society who we have been unable to get better involved in politics. I know three women who have moved onto to other parties citing the previous handling of complaints for their defection; this is not something we can ignore.

When our party is already facing gender equality and representation issues it is essential that we get this resolved. And, in doing so, it will actually help the party by helping it to retain the involvement of women and to better represent the communities whose votes we seek.

Be radical. Back amendment one.

I believe this amendment be workable as it offers the party scope to see how far they are willing to/are able to adopt an AIR system - but this amendment also seeks to be radical in its approach and more importantly this amendment puts victim’s agency at the heart of our new disciplinary procedure.

We have a long tradition of backing technological and innovative approaches to enhance policy and its implementation. It is in that tradition that we should take this opportunity, embrace a radical approach to combat sexual assault, and be the first party to lead the way on such horrendous crimes. Let’s use tech to be tough with those who drag our party down – please help me pass Amendment One to motion F11.