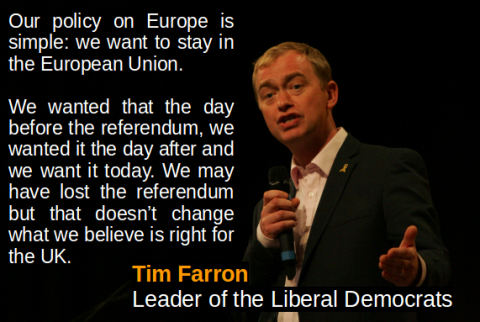 The Radical Association welcomes the announcement today of the new Lib Dem plan for Britain in Europe.

We don't shy away from constructively criticising the party when it goes wrong but this is a case where the Liberal Democrats have got it absolutely right.

By committing the party to continue supporting EU membership, and to campaigning for a referendum on the terms of Brexit proposed by the Conservative government, the Lib Dems are well placed to reach out to the millions of Remain voters who continue to oppose Brexit and who have no other party to speak for them.

However, it's vital that this announcement isn't the last we here of this policy.

The Liberal Democrats must repeat their stance on Europe consistently and repeatedly until their members are sick of talking about it - only then will it finally have started to register with the average voter who doesn't follow politics closely.

The full details of the plan for Britain in Europe can be read below. Let's hope they're coming to Lib Dem leaflets and campaigning near you soon.