This is the announcement of our 2019 committee election!

The timetable will be as follows:

All of the eight posts in our committee - four executive members plus the chair, director, treasurer and access & diversity officer - will be up for election:

The Radical Association Executive have four voting recommendations for members who are seeking to promote radical policy at Liberal Democrat Autumn Conference in Brighton.

On Sunday, 16 September, 11.00-12.30, we are working with other groups on a reference back of the immigration motion, F16. We urge members to join us in voting the reference back through.

On Tuesday, 18 September, 11.30-12-30, we are recommending that members vote for Amendment One to the party strategy motion F35. 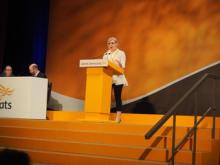 Last Spring, I spoke against our party’s disciplinary motion, “Our party aims to be agents of change and we do so by producing progressive policy’, I nervously spluttered, my first ever time speaking in that bright-light yet mustardy stage-space. So it is a natural progression then, that this Autumn conference I have submitted my first ever amendment.

Heart palpitations aside, I am hoping to positively reform the Party’s Disciplinary procedure. In order to lend my support to the overall motion I am seeking to persuade the members in the conference hall to take a innovative and user-led approach to tackling the scourge of sexual harassment and assault, unseen by any other political party to date.

From my experience, and after consulting with fellow female Liberal Democrats, with victims of abuse, and after seeking legal advice, I can see a way for us to take head on an issue which most other institutions sweep under the carpet.

My proposed system, Anonymised Incident Reporting (AIR), maximises complainant control when reporting or logging an offence, offering victims a variety of ways to anonymously detail what has happened to them or what they have been witness to.

To summarise, AIR allows survivors of sexual assault to create encrypted, time-stamped records of their assault, and to only formally hand their report to the party as a full complaint when they're ready to take action. It encrypts all information on both the complainant and assailant, and offers victims multiple options in how they handle their report and whether to turn it into a formal complaint.

An AIR system would allow the party to offer some initial support and advice to anonymous victims - both about how they move forward with their report and what other support they can seek.

The Radical Association are urging members to call for a rethink of the immigration policy paper being presented at Autumn Conference.
Writing on Liberal Democrat Voice, our Chair Luke Graham said:

"We’re at a point in rebuilding our party from some bad electoral losses where it’s crucial that we build a clear, separate identity as voices to empower the voiceless, and being proudly pro-immigration is a vital part of that. Passing F16 would undermine rather than support that."

We are asking party members attending Conference to vote for a reference back on motion F16 because – in part due to a flawed consultation process and insufficient postconsultation discussion with stakeholder groups such as Liberal Democrat Immigrants – the Working Group has produced a Paper with unwelcome rhetoric, policies which are not sufficiently radical and, particularly in advocating increased funding of the Border Force, will have illiberal consequences.

You can download the policy paper here, and read the Radical Association's full response and our case for a reference back here.

If you agree with our position, and you have Lib Dem friends on Facebook, please add a frame to your Facebook profile picture.

We can now announce that Luke Graham is the new chair of the Radical Association following a by-election, and that by-elections for executive member roles have added Jess Insall, Ross Stalker, and George Potter to the team.

We are pleased to be able to announce the results of the 2017 committee elections.

We're pleased to announce that the supplementary briefing, the second part of our conference briefing, has now been completed and is available to read. Whereas the main briefing deals with an overview of the motions throughout conference, the supplementary briefing discusses all the amendments that are being tabled, along with a brief overview of each of the options on the emergency motions ballot.

We're very pleased to be able to release our autumn conference briefing 2017. This briefing gives our thoughts on all the conference motions from a radical perspective; it is mostly not intended to be prescriptive, and mostly talks through the positives and negatives of different motions in a way that will hopefully be helpful to members when deciding how to vote.

As an association, it's been our aim from the very beginning to not only campaign for radical policies but really help unleash a new wave of liberal policymaking to see our traditional ideas and values as liberals engaged to tackle the problems of the 21st century. As such, I'm very proud to announce that we're getting started on that with the association's first policy working groups.

By George Potter - Radical Association executive member.
The outcome of the general election is one that few expected. The dust is still settling but here are some thoughts on what lessons the election result offers to liberalism:
1) There is a large anti-Tory vote in England.
Unfortunately, it overwhelmingly went to Labour. The higher turnout, especially amongst younger people, proves that there is immense appetite for an alternative to the Conservatives and the economic and social status quo in this country.