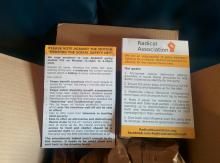 Summary: The welfare motion that recently passed Liberal Democrat conference, whilst committing the party to campaign for important and positive changes to the current welfare system, falls short of being a much needed vision for a radical overhaul of social security for the 21st century. Nonetheless, we welcome the improvements made to the party’s policy by the motion, and look forward to this being a stepping stone towards the adoption of a bolder, more forward-thinking policy in future to overhaul the welfare system at a fundamental level.

Leading Labour MPs are calling for the UK to leave the single market in order to end free movement with the EU. But doing so would mean devastating our economy and destroying thousands of jobs - inevitably hitting the poorest the hardest.

Those in the auditorium for Tim Farron's closing speech at Lib Dem autumn conference were witness to a speech that was inspiring, powerful and full of conviction.You can watch the speech below and if you're a Liberal Democrat it's very likely that it'll leave you deeply moved and fired up.

This weekend the picturesque beaches of Brighton will be swamped with lanyard wearing liberals. But if you can pull yourself away from the sunny skies for a few hours, in the dingy Brighton centre there are going to be some very important (and contentious) debates at this conference. Remember every party member who has paid to attend conference gets a vote. So for the perpetually unprepared, here is your guide to what the must-see debates are:
Saturday

At Liberal Democrat conference, party members will have the chance to debate policy motion F31 on Monday 19th September from 3.15pm to 4.45pm.

The Radical Association urges all party members to vote AGAINST this policy motion.

Motion F31 is proposing new policy on welfare for the Lib Dems. However, despite being called ‘Mending the Safety Net’, the motion does nothing of the sort. It actively endorses the current welfare system which is failing so many vulnerable people.

We believe the motion needs to be voted down on the following grounds:

The use of the word Radical in our name is a deliberate choice. It symbolises two things.

Firstly, it symbolises that we are radical in our goals. We ultimately want the Liberal Democrats to become the largest party in the United Kingdom and we're in favour of radical action to reform the party - such as organising in internal elections, reforming the party institutions and not being afraid to criticise the party establishment when they get it wrong.

The Radical Association welcomes the announcement today of the new Lib Dem plan for Britain in Europe.

We don't shy away from constructively criticising the party when it goes wrong but this is a case where the Liberal Democrats have got it absolutely right.

By committing the party to continue supporting EU membership, and to campaigning for a referendum on the terms of Brexit proposed by the Conservative government, the Lib Dems are well placed to reach out to the millions of Remain voters who continue to oppose Brexit and who have no other party to speak for them.

In the latest edition of Ad Lib, the new Liberal Democrat Director of Campaigns and Elections Shaun Roberts has outlined his priorities from the party as a campaigning force going forward.

For those who have not received their Ad Lib yet or – worse – not read it (tsk!), he outlines them as follows:

Last week the Lib Dems announced a policy which got (relatively speaking) a lot of media attention - a proposed 5p tax on coffee cups to discourage waste.

There are two big problems with this.

Firstly, although the policy isn't a bad idea in itself, it is not about an issue which many people would consider to be a major challenge facing the country and the proposed tax is such a bland idea that it says nothing about core Lib Dem values.